At Viking, they are proud of their Norse heritage and like their other Longships their ten new Viking Longships too are named after celebrated Viking gods and goddesses.

Their Longships that are named after women are:

Though not strictly a goddess, the legendary mortal, Embla was the first woman to be created, the mother of the human race. Along with Ask, the first man, Embla was created by Odin from tree trunks found on the seashore.

Freya is the goddess of love, beauty and fertility. She was the sister of Frey, the god of harvest and together they ensured good crops and large families. ( Interestingly Freya’s father, Njord, is the god of wind and was known to be able to calm the waters and it was on the Njord I sailed last year – and loved it.) 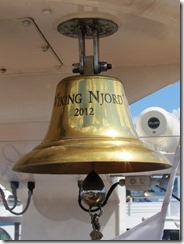 Idun is the goddess of spring, rejuvenation and eternal youth. She is the custodian of the golden apples of immortality, which the gods ate to preserve their youth.

Rinda, or Rind as she is sometimes called, is a goddess of the earth. She was the lover of Odin, and mother of Vali.

Skadi is the goddess of winter and of the hunt. A formidable warrior and hunter, she was married to Njord. Scandinavia, ‘the land of Skadi’, is named after her.

VIKING VAR Goddess of marriage oaths, Var listens to agreements between men and women and punishes those who break them. Couples invoke the name of Var when they wed.

Playing an integral role at the launch (which created a world record for the most longships launched on one day) were 10 distinguished women who represent key Viking brand pillars of history, art, education, exploration and discovery, to serve as ceremonial godmothers for the new ships.

With cultural enrichment and privileged access at the heart of every experience Viking offers its guests, these 10 women were selected to honour that focus and serve as ceremonial godmothers for the new ships. They included:

•Lady Fiona Carnarvon, Godmother of Viking Skadi, is the wife of George Herbert, 8th Earl of Carnarvon. A former auditor at Coopers & Lybrand, Lady Carnarvon ran her own fashion label, Azur, and now successfully manages affairs at the Castle, including many special events such as the Egyptian Exhibition. Fascinated by Highclere’s rich history, Lady Carnarvon recently authored the New York Times Bestseller “Lady Almina and the Real Downton Abbey: The Lost Legacy of Highclere.”

•Agapi Stassinopoulos, Godmother of Viking Rinda, was born and raised in Athens, Greece. While collaborating with her sister, Arianna Huffington, on research for her book about the Greek gods, Stassinopoulos’ love for the gods and goddesses was ignited and led to two books of her own – “Conversations with the Goddesses” and “Gods and Goddesses in Love” – as well as a one-woman show and a PBS special. She also co-produced and co-hosted a documentary called “Quest for the Gods,” shot on location in Greece. Stassinopoulos speaks and conducts seminars around the world, and her latest book is the bestseller “Unbinding the Heart.” She is also a frequent contributor to The Huffington Post.

•Alexandra Lobkowicz, Godmother of Viking Forseti, is the chairman of the nonprofit that oversees the preservation of the vast Lobkowicz collections including thousands of works of art, a significant library and family archive spanning eight centuries. In addition, she oversees dozens of international loans, festivals, restoration projects and ongoing educational programs relevant to the collections. A former teacher, Lobkowicz also established educational programs at the Lobkowicz museums to help raise funding for Czech schools. With personal input from Alexandra and William Lobkowicz, Viking has introduced a privileged access tour to Lobkowicz Palace in Prague.

•Zhang Ling, Godmother of Viking Embla, is a dedicated educator at Cen He elementary school in the city of Jinzhou, Hubei Province, China – a school sponsored by Viking River Cruises. As one of many dedicated teachers she feels fortunate to have won recognition as an “excellent educator,” “excellent educator of ethics” and “excellent mentor for young pioneers.” She also coaches the children’s orchestra, which has proudly performed for the thousands of Viking’s Yangtze River cruise guests who have visited during the past seven years.

•Marit Barstad, Godmother of Viking Tor, is the sister of Viking’s chairman Torstein Hagen. Marit started her working life as a personal assistant to the chairman of Øivind Lorentzen AS, a company that in the late 1960’s built two of the ships that subsequently became Princess Cruises. She is now a manager in the health services sector in Ski, a town outside Oslo where she has lived with Odd Barstad, her husband for over 40 years.

•Dertje Meijer, Godmother of Viking Bragi, is President and CEO of the Port of Amsterdam, which is the fourth largest port in Europe, hosting more than 100 sea cruise ships and 1,300 river cruises ships, and handling more than 75 million tons of cargo every year. Prior to Meijer’s career at the port, she worked for 15 years in business development projects at one of the world’s great transportation hubs, Schiphol Airport.

•Geraldine Norman, Godmother of Viking Var, is founder of the Times-Sotheby index of art prices and best-known for her discovery of the art forger Tom Keating. An expert in the history of The Hermitage Museum in St. Petersburg, Russia, Norman also authored “The Hermitage: The Biography of a Great Museum.” Since, Norman has been working on international outreach for the Hermitage, starting The Hermitage Magazine and assisting in the set up the Hermitage Rooms exhibition space in London.

•Sabine Rhabek, Godmother of Viking Jarl, is a founding member of the emergency room team at the General Hospital (AKH) in Vienna and a former nurse at the United Nations Mission Hospital in Iran, where she provided medical care to thousands of Kurdish refugees during the first Gulf War. Following her time at the Mission Hospital, Rhabek transitioned into medical technology, providing tech support for users of implanted defibrillators and pacemakers.

•Eszter Völner, Godmother of Viking Aegir, is a Budapest native, and lives on the Danube’s shore. Daughter of Dr. Pál Völner, secretary of the Hungarian State Ministry of National Development, she studies tourism and catering as well as her first love, music, including voice and violin, and looks forward to a future in the classical singing field.

Thanks to Viking for this information about their godmothers and the names of the female longships.

One thought on “Godmothers, goddesses and longships!”