Despite having a wee kitchen, the size of a yacht galley, I love food. And, living alone, I whip up few culinary delights – even though I attended one of the first cooking schools in Thailand; managed a café in Athens for couple of months’ mid-season, and even worked as a sous chef in Wales – in an Italian restaurant, under a French Chef. I’m like the Guardian’s Jay Rayner, ‘a greedy’ eater, and like him, I love smelly foods like blue cheese and durian.

When I was a vegetarian it was difficult to be sure no chicken had sat in the soup water despite having learnt to say I don’t eat meat in a dozen different languages. “Vegetarian meal? No problem, here is chicken, fish or pork.” As long as it has no red meat some assumed it was vegetarian. “No – no meat, no chicken no pork. Rice please. No, no soup on it” I’d say as they carefully scooped some liquid and left the chicken pieces floating in the fatty cauldron.

Some countries are easier to travel in when you don’t eat meat however even some Buddhists eat meat. During those vegetarian days, the best place I found for vegetarian meals was a small suburb in Georgetown, Penang (Malaysia) If you are going there, write out these directions – I hope they’re still there as I’m going back in a few months.

Go to the reclining Buddha (walk or bus from town) then cross the road to visit the peaceful Buddhist temple and when you have finished looking, go out the front gate – turn left, walk a kilometre down the road to a T-intersection, turn left and stop at any food shop. I guarantee it will be fantastic.

I also know you will ask, as I did, “Are you sure this is vegetarian? No meat?” They were amused. Yes, no meat. They have developed creative and tasty ways of using tofu in its many forms – I forget what ethnicity they were.

After a few years, I gave up being vegetarian and would join locals and try their cultural delicacies such as crocodile, haggis, and in Cairo, pigeon stuffed with green rice. My stomach still continues its cast-iron behaviour of allowing me to eat everything put in front of me.

However, for many, apart from tummy problems there is a down side to travel: you’ll be destined to be rich in many ways but will be cash poor. You could be infected with a disease to which there is no known antidote; the travel bug.

Travel also gives you, a new way of thinking. Long held “truths” no longer seem true when viewed from a different culture, a different perspective.

A simple example is eating. Most New Zealanders are taught to eat with a knife and a fork. Knife, in the right hand, for cutting and the fork, in the left, for hold the food then placing it in our mouth – in other words the “right” way.

Of course, in other countries this is not the ‘right’ way. In the USA, the fork is in the left hand; in Thailand food is cut to bite-sized pieces during the preparation process and a spoon is used to eat, other Asian cultures use chop sticks, another country, their right hand. To each culture their way of eating is the ‘truth’. But what about other ‘truths’. 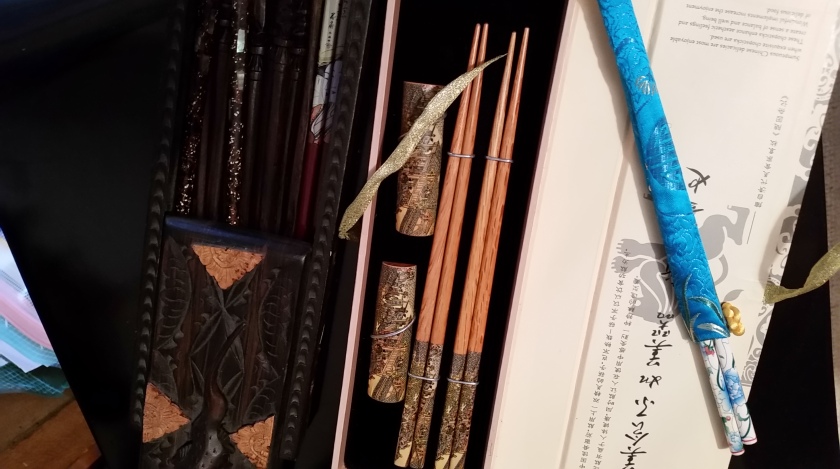 Travel is intensified living, nothing can be taken for granted. It’s like having a new pair of glasses, we see often things, and ourselves, more clearly. Nothing is familiar, we are constantly aware of, or curious about, what is happening around us. We watch the interaction between people and try to decipher it. Body language is different from place to place and our previous knowledge of the rules of interaction no longer apply. And that’s one of the reasons why we travellers love travel.

Why travel? Why not! Traveller or tourist, armchair or plane, life is richer not poorer, enriched not impoverished, colourful and, certainly never dull.

But, knowing all that, and knowing to always use a spoon in Thailand – and not to put a fork in my mouth while there – or lick a knife in New Zealand, why oh why do I get so uptight when I don’t get a soup spoon to eat soup?

Guess those old ‘rules’ that I was raised on are right there, just waiting to be used. Nevertheless, however I’m eating, I assume that somewhere in the world it is the correct way to eat, the ‘proper’ etiquette – I may just be misplaced at times.

2 thoughts on “What’s the right way to eat?”