They say good things come to those who wait: my trip to Kāpiti Island with Kāpiti Island Nature Tours proved the adage. This blog sets the scene for a series of posts (and photos) about my time as a guest of my Māori hosts.

Shaped by ocean currents, wind and quakes or, as legend says, sliced from the mainland with blows from Kupe’s paddle, this island has become a lifeboat for New Zealand’s flora and fauna.

Interestingly such of the vegetation there has more in common with the South Island than the North suggesting a land bridge to the south and not the close-by Kāpiti Coast.

After two aborted trips to the island, because of bad weather stopping the boat, in late 2014 I finally got to visit one of NZ’s longest restoration stories.  In 1897 the island became a nature reserve after being acquired, or taken, by governmental legislation, for use as a bird sanctuary

New Zealand history says  “At the end of the 1880s scientists were concerned about the loss of native plants and animals and the impact of introduced predators and pests. Taking their lead from Potts, who in 1878 suggested the creation of ‘national domains’ as refuges for native birds, scientific societies helped create offshore islands as flora and fauna reserves. These included Resolution Island (1891), Secretary Island (1893), Little Barrier Island (1895) and Kapiti Island (1897). The societies were led by notable figures such as botanist Leonard Cockayne and politician Harry Ell”. 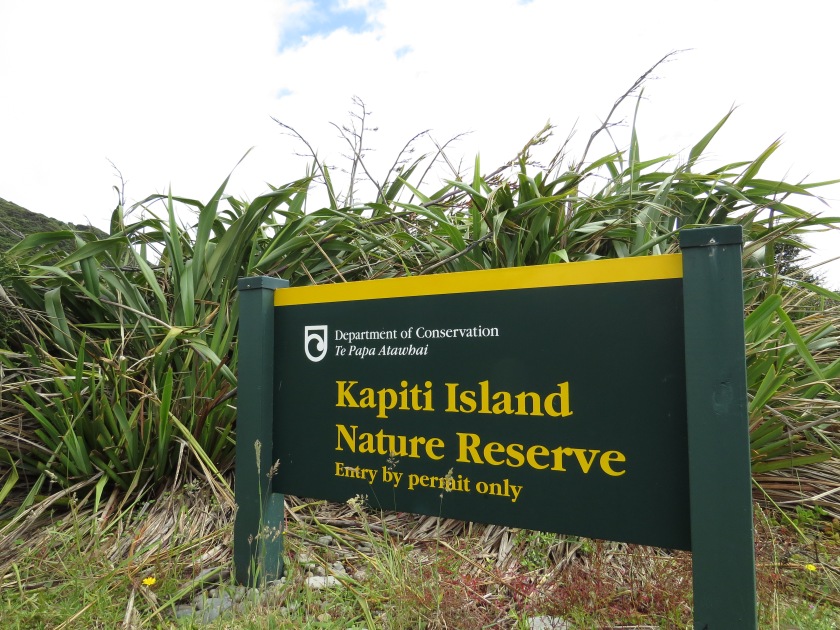 Large scale colonisation didn’t begin until Ngāti Toa, under Te Rauparaha who was at the height of his powers, captured the island from Ngāti Apa and Muaupoko and began farming to supply the whaling and coastal trading ships

The first whaling station had started in 1829 and by early 1830 there were seven on the island with some 4000 Māori and 600 whalers living on the island.

Now one of New Zealand’s most valuable nature reserves, these 1965 hectares, our 2nd largest offshore natures reserve, is free from introduced animals (and predators). As a sanctuary for wildlife, its vegetation is of equal importance and restoring and preserving vegetation that was once common in coastal and lowland parts of central NZ.

Bookmark this blog to read more about my hiking there and to see more photos of the wonderful bird life – the abundant birdsong was clear as soon as we stepped off the water taxi.

Lonely Planet raved about Footprints Waipoua and now, after last night’s adventure I will too. Our local Maori guide, Koro, really did guide us through the forest and introduced us to the biggest, and oldest of the kauri trees in the Waipoua Forest but now it’s not a lush forest I’m off to see but sand dunes.

After a cooked breakfast at the Copthorne, I check out, then catch the Hokianga Express boat over to the sand dunes for a Sandtrails Hokianga dune buggy trip around the sand hills I could see from my hotel room.  The others on the water taxi are heading off to ride the dunes on body boards! 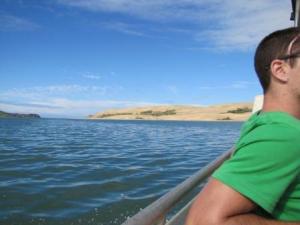 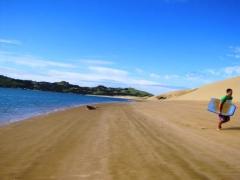 Once over the harbour, waiting at the bottom of the dunes for me is Andrew Kendall of Sandtrails Hokianga with his dune buggy, ready to take me around the sand hills and natural sculptures. 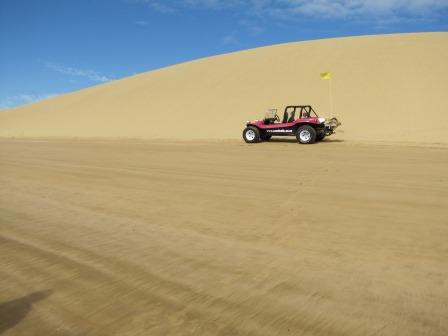 The Hokianga is not just blue skies, massive sand dunes and ancient trees – it’s also the cradle of not only Ngapuhi, but also of the European settlers in the early 1800s. Andrew Kendall’s tribal history, his whakapapa, like that of my deceased husband, includes their ancestor, Kupe, the Polynesian navigator who named this area when he left to return to the Islands north of New Zealand.

Andrew stands with me on top of the giant sand dunes, canyons,  and sculptures on the north of the Hokianga Harbour  – where Kupe first arrived – and regaled me with stories of the past with its intrigues, strife and wars, deception and fun. One of the great things about this trip, in a dune buggy, is that it’s pretty exclusive as only three people can do it at a time so I recommend you book in advance. (You can even stay at his Homestay B&B in Mitimiti.)

No matter where you are over the length of New Zealand, Maori culture, and a diversity of enterprises and activities are just around the next corner and Sandtrails is one of a kind!

Note: my trip around Northland was taken in my favourite car rental company NZ Rent A Car! 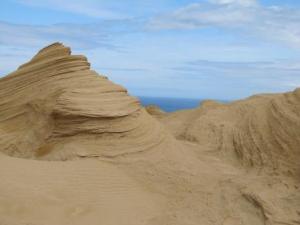 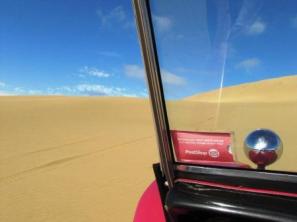